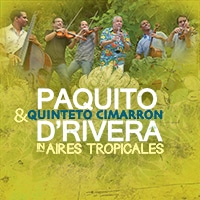 Cuba’s musical legacy is one of tremendous variety. The tradition of classical music was introduced early and has been nurtured for generations in the country’s many highly regarded conservatories. The music of the people, namely the son, danzon and habanera, are still popular and played routinely. Jazz was a late addition to the fray but has remained popular with many Cuban musicians.

It was at a symposium in Galicia, Spain that D’Rivera was introduced to Quinteto Cimarron, a classical string quintet made up of Cubans based in the north of Spain. The members all have extensive training and backgrounds in classical music from their childhood days in Cuba to their transition to ensembles in Spain, where most have lived since the late 1990s or early 2000s. The ensemble consists of violinists Eduardo Coma and Lazaro W. Gonzalez Pena, violist Raymond Arteaga, cellist Luis Caballero and contrabassist Oscar Rodriguez.

For the recording, D’Rivera brought his “Aires Tropicales”, originally composed for a wind quintet. His friend and leuthier Luis Rossi had arranged the pieces for clarinet and string quartet. Violist Eduardo Cana added a contrabass part that was recorded here along with a variety of pieces by Cuban composers, ranging from some dating from the early 20th Century to contemporary composers active today.

Paquito D’Rivera’s collaboration with Quinteto Cimmaron provided a return to the musical roots of Cubans with diverse musical leanings and highlighting Cuban composers. Aires Tropicales is as a testament of excellence of this cadre of Cubans.